Past performance does not guarantee future media results

Just because a stock rose 20% last month does not mean that it will rise another 20% next month. It’s a basic principle in finance: Past performance does not guarantee future results. The same is true in marketing.

Two weeks ago, Nielsen reported that erstwhile teenagers are now tuning into more radio than before:

“Back in spring of 2011, consumers 12-17 spent an average of nine hours and 15 minutes with radio each week – not internet radio; not satellite radio; just good old AM/FM radio. Fast forward six years later, and these same consumers (now 18-to-24-year olds) spend an average of 10 hours and 15 minutes with radio each week. In other words, when teens grow up, they spend more time listening to the radio.” 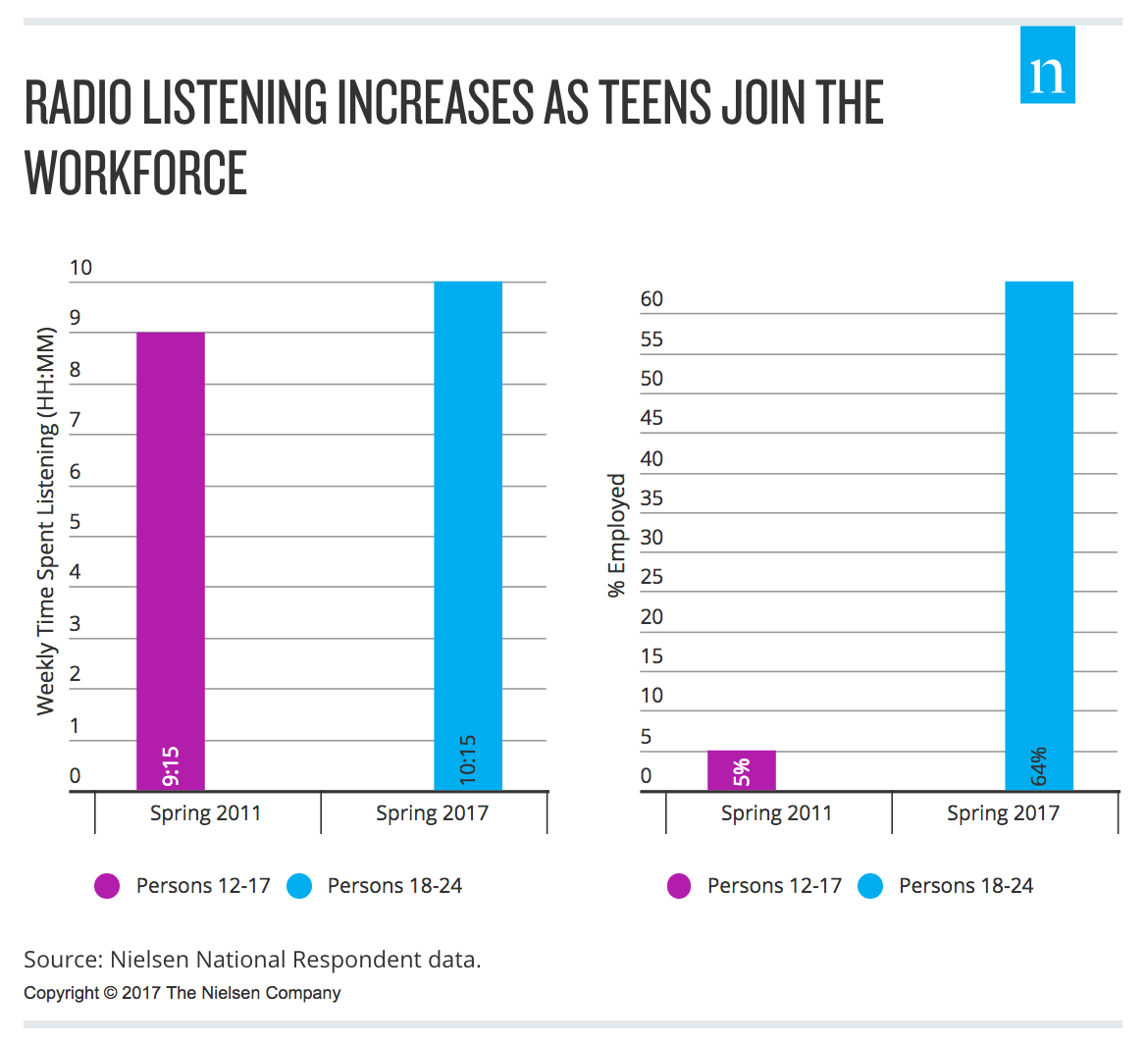 Essentially, Nielsen surmised, when teenagers grow up and get jobs, they listen to the radio at work as well as in the car as they commute. But I am still sure that some marketer somewhere once looked at a bunch of teenagers not listening to the radio, proclaimed the medium to be “dead,” and advocated that marketers move their dollars to digital to reach these children for the rest of their lives.

In my prior analysis of the radio industry, I observed that the medium is alive and well – although the data did lend some credence to the fears of some broadcast marketers that young people are giving up on the radio. However, Nielsen’s new information proves that such assumptions are incorrect. After all, media consumption changes as both people and their lifestyles change.

I never thought that I would watch music videos again after MTV stopped playing them in high school. Today, however, I have VH-1 Classic – the US and UK hits of the 80s, 90s, and 00s – playing on satellite TV in the background in my home office for creative inspiration. (Observation: Murder on the Dance Floor by Sophie Ellis-Bextor was the 2001 version of Game of Thrones. Watch it again, and you’ll see.)

It’s why the constant flood of articles on the characteristics and media habits of millennials and Generation Z are wastes of time to read. Demographic groups are not marketing segments, not everyone in a generation is the same, and people change as they get older. By the time millennials are middle-aged with children, they might be too tired to search Netflix for something to watch when they return home from work. They may plop down on their couches and turn on the large boxes in their living rooms just like their parents.

Or not. We cannot know. The point is marketers cannot predict future media usage based on current trends. But so many marketers take, for example, a one quarter slump in the user growth of a given digital medium and then immediately proclaim it as dead and buried. Marketers need longer attention spans.

The rebirth of traditional news

As someone who was a journalist in my first career before marketing, I always fear that the professional journalism that educates the public and keeps a check on The Powers That Be is on the verge of suffocating in a sea of clickbait, ad tech, and fake news.

Following Brexit and the ascension of Donald Trump to the presidency of the United States, people are realising that information is not something that should be left to Facebook’s news feed algorithm. After all, the company’s platform is designed to keep people engaging with posts for the advertising revenue and not to educate users on current events accurately and fairly.

Someone once asked me how to know which news outlets people can trust. Here is one of my rules: if the publication existed before the internet, then it is much more likely to adhere to a set of longstanding professional standards. And those types of traditional news outlets and print magazines are seeing a resurgence:

Mainstream publications with crusty, hard boiled editors who proofread copy, check facts, and publish fair and neutral articles? Dead-tree print magazines that report the big picture and that people can read in the palms of their hands without staring at a screen and straining their eyes?

It’s not only major news outlets and magazines. Libraries have always been the epitome of traditional media preservation and consumption going back thousands of years, and they have been resurrected just as surprisingly as Jon Snow.

The Pew Research Center in the US recently found that millennials – those who even grew up with all of the information that humanity has ever produced at their fingertips – value libraries more than any other living generation:

"On each of these questions, millennials (those ages 18 to 35 in 2016) stand out as the most ardent library fans. Young adults, whose public library use is higher than that of older Americans, are particularly likely to say the library helps them with information.” 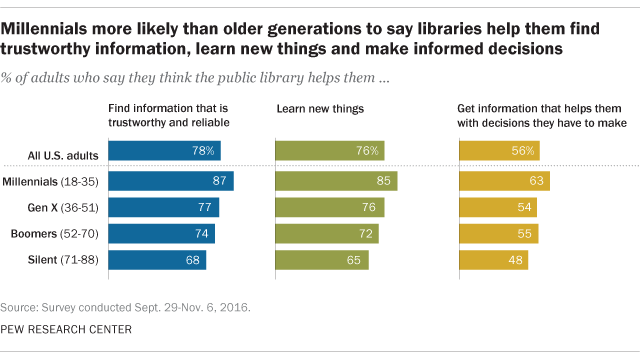 The last time I was inside a library, I got a paper cut from the card catalogue while I was doing research for a university paper on the differences between John Stuart Mill’s utilitarianism and Immanuel Kant’s categorical imperative. So, this resurgence is a pleasant surprise.

Why is this happening?

While every generation of people likes to think that it is unique and different, human beings in reality tend to fall into the same general behaviours. The differences between generations are usually cosmetic in terms of things such as music and fashion. Humans are always human.

Whether it is 1987 or 2017, many people will always listen to the radio or other similar passive audio entertainment while they are getting ready or commuting to work in the mornings. People will always look for quality sources of news and information – even if they must be reminded to do so by some cataclysmic event from time to time.

Media selection does not change that quickly among the general population and any evolutions are rarely permanent. After all, vinyl records and cassette tapes are making comebacks as well.

As I wrote in a column on how TV is also not “dead”, marketers need to remember that our habits are not indicative of society as a whole. We are first-movers and tend to adopt every shiny new thing that comes along, but we are not the target audience and cannot plan our campaigns based on the channels that we prefer. I myself do not watch much live, prime-time TV, but I have known that most of the people to whom I have marketed in prior jobs and consulting roles do.

The real difference between analogue and digital

Analogue is a marker of quality. The average quality of something in media is proportional to the level of difficulty in creating it. Quality over quantity. Creativity over cookie-cutter optimisation.

Most blogs are drivel because anyone and everyone can publish a post in minutes. Only the best work of the select few of a select few will appear in the New Yorker. People are realising that if they want quality, they need to skip random blogs and go to mainstream news publications and magazines – and they will increasingly need to pay for the information as well.

It is easy for people to record themselves singing and upload it to YouTube rather than audition for a record label. Again, think about the quality. Who was the first rock star? Chuck Berry. Who was the first YouTube star? Justin Bieber. Music companies used to select artists for their ability to sing and play instruments rather than dance and get half-naked in online videos.

Writing a physical book or magazine and then getting it placed in a bookstore by a publishing house adds a certain panache that no self-published e-book or e-zine will ever have. For example, the Polish agency Sprawny Marketing recently translated an old article of mine in the latest issue of its quarterly magazine: 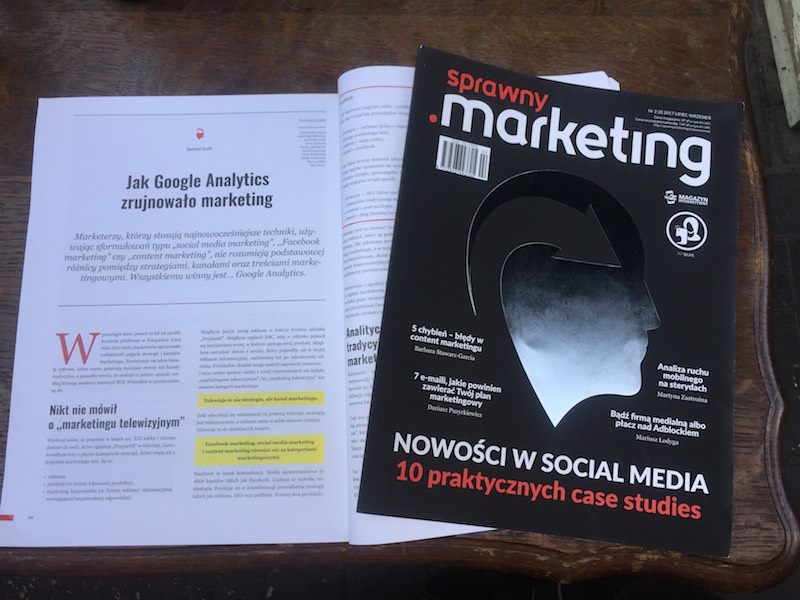 Countless marketing agencies publish blog posts, white papers, e-books, webinars and infographics, but they are rarely impressive because the internet is polluted with all of this material under the desire to do so-called “content marketing” as a cheaper way to get clients. The higher cost of going “analogue” – doing things ranging from creating professional magazines to holding the conferences that I attend as a marketing speaker – is also a subconscious marker of a better brand and agency that has the resources to market offline.

The physical magazine from the Polish agency was the first one I had held in my hands since I read Maxim in university in the early 2000s. (I was young.) I had never heard of Sprawny Marketing and I certainly do not read Polish, but I could almost feel the brand of the agency growing in my mind as I flipped through the publication. The pages even had a crisp smell.

Noting the growing use of radio, traditional news outlets, and libraries, it seems that the younger generation is realising the importance of quality media and starting a subconscious rebellion against a potential all-digital world. I read envious comments online from younger people wondering what life was like before everyone was addicted to smartphones.

“When we look at how Generation Z and younger millennials interact with media, it’s easy to assume that these habits don’t include traditional mediums alongside the new ones. That’s where data can help separate the reality from the speculation.”

There will always be a place for most mediums. Except for carrier pigeons and ravens. They are as dead as Littlefinger – his past performance did guarantee his future result.

The Promotion Fix is an exclusive biweekly column for The Drum contributed by Samuel Scott, a global marketing speaker who is a former journalist, newspaper editor, and director of marketing and communications in the high-tech industry. Follow him on Twitter and Facebook. Scott is based out of Tel Aviv, Israel.