The Burger King? A look at the maverick brand's sales during Fernando Machado's CMO reign

On one hand, Burger King’s creative campaigns during the tenure of former CMO Fernando Machado received much acclaim, including top spot in the World Creative Rankings. On the other, some pundits dismissed the headline-making ads as mere stunts that did little to help the fast-food chain's bottom line. So, who was right? Columnist Samuel Scott investigates.

Burger King was number two, so Fernando Machado tried harder. But did the former chief marketing officer succeed? For this column, I compiled various sets of performance data and then interviewed Machado, who this week took up the marketing reins at Activision, for his thoughts.

To examine the effects of his campaigns, we first need to look at comparable sales in the US. (For simplicity, I mainly analysed only that home country for this column. Results elsewhere may be different.)

The term refers to the change in same-restaurant sales in one period from the same prior-year period. Fluctuations in comparable sales are driven by changes in the numbers of customers and the sizes of the average check.

Many “non-GAAP” financial metrics are full of crap. (I’m looking at you, WeWork’s “community-adjusted EBITDA” and Uber’s “adjusted EBITDA.”) But comparable sales is an exception.

In the retail, restaurant and fast-food industries, the measure is usually more useful to examine than overall top-line revenue because the numbers directly reflect on company initiatives as well as consumer and economic trends.

(Notes: Burger King’s percentages for the first three years are for the entire world, not only the US. Parent company RBI did not break down the results that way in the annual 10-K reports and did not respond to my request for that specific information. Further, I created all the charts in the column.)

Despite Burger King’s comparable sales success in the US, Machado told me that global system-wide sales would be a better assessment metric because McDonald’s and Burger King have different strategies.

According to their annual reports, here were the annual percentage changes in worldwide system-wide sales from 2014 to 2019. (RBI did not break out the information for only the US, so I had to make an even comparison globally.) 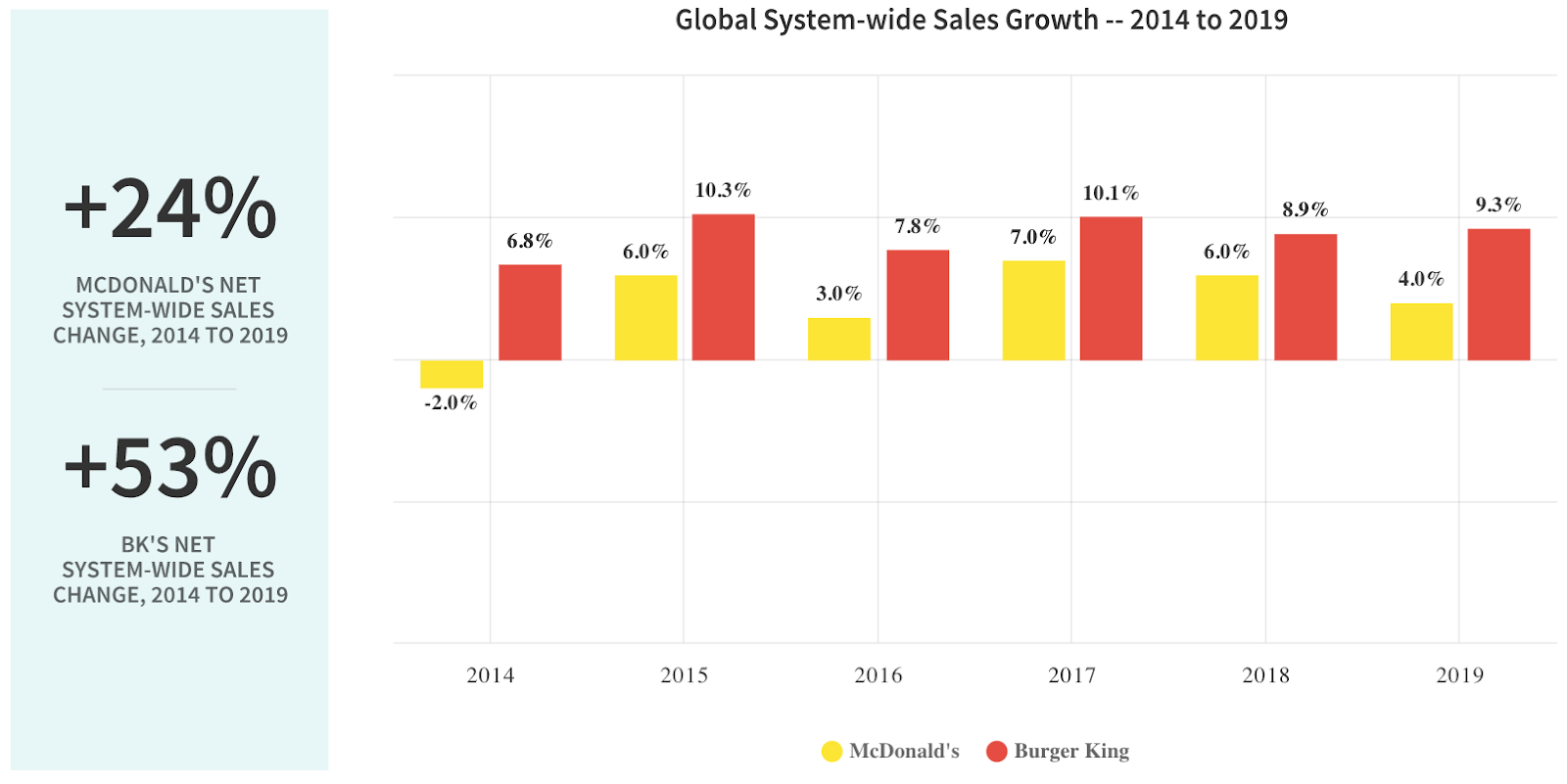 In that analysis, Burger King had also been the clear winner when the annual percentages are summed together.

So, what happened? Let’s look at the business history (focused mainly on the US).

Success in the fast food industry in the short- and medium-term typically comes down to three pillars: products, sales promotions and physical availability. In other words, it is having food people want, cheap package deals and many franchise locations.

When Machado joined Burger King in 2014, McDonald’s was having a bad year.

“In the US, comparable sales declined 2.1% and comparable guest counts declined 4.1%,” the company’s report for that year states. “Guest visits were down as customer-focused initiatives did not resonate strongly amid the increasingly competitive marketplace and sluggish industry growth. To enhance customer relevance and loyalty, the US is focused on addressing menu, service and value opportunities.”

In response, McDonald’s started to accept Apple Pay at drive-throughs in late 2014 and doubled down on some of its most popular products by launching All Day Breakfast in 2015. That same year, the company ran brand advertising campaigns such as this one in the UK for the long-term goal of emphasizing food quality and healthiness.

In the following years, McDonald's would add McCafé-branded espresso drinks to the menu, introduce self-service kiosks, use promotions such as $1 any-size soft drinks, experiment with pre-pandemic home delivery and raise prices on items not on the value menu. Although Burger King’s total annual US comparable sales growth from 2014 to 2019 exceeded McDonald’s, the latter chain has surpassed the former each year since 2017.

As RBI’s chief marketing officer in his last position with the company, Machado told me that he was responsible for things including brand positioning, design, restaurant image, ingredient policies and environmental sustainability for Burger King, Popeys and Tim Hortons.

In 2014, Burger King’s comparable sales grew 2.1% “primarily due to our continued strategy of launching fewer, more impactful products, complemented by value promotions,” RBI’s annual report states. (In 2012, Burger King launched the largest menu expansion in the brand’s history for 3% growth only to see a decline in sales the following year.)

In 2015, Burger King had a huge 5.4% growth year following the introduction of chicken fries, a Sriracha cheeseburger and a Halloween Whopper as well as a “2 for $5” promotion.

Later, the chain continued to grow in US comparable sales – even if was not able to keep up with a resurgent McDonald’s after 2017 – with the plant-based Impossible Burger and the introduction of a $5 monthly coffee subscription as a presumed loss leader to get people in the door during the mornings.

But one thing that has greatly helped Burger King in terms of global system-wide sales was a franchise expansion in Europe and Asia. In 2017 and 2018, for example, RBI opened 1,300 new locations each year – most of which were Burger Kings. In 2019, RBI stated that the company planned to expand the number of locations for its three brands from 26,000 to 40,000 worldwide in the 2020s.

Before the coronavirus pandemic, Burger King had grown more than McDonald’s over the prior six years overall. But then the opposite happened in 2020. Here is the global system-wide sales and US comparative sales data, according to the companies’ annual and quarterly reports. 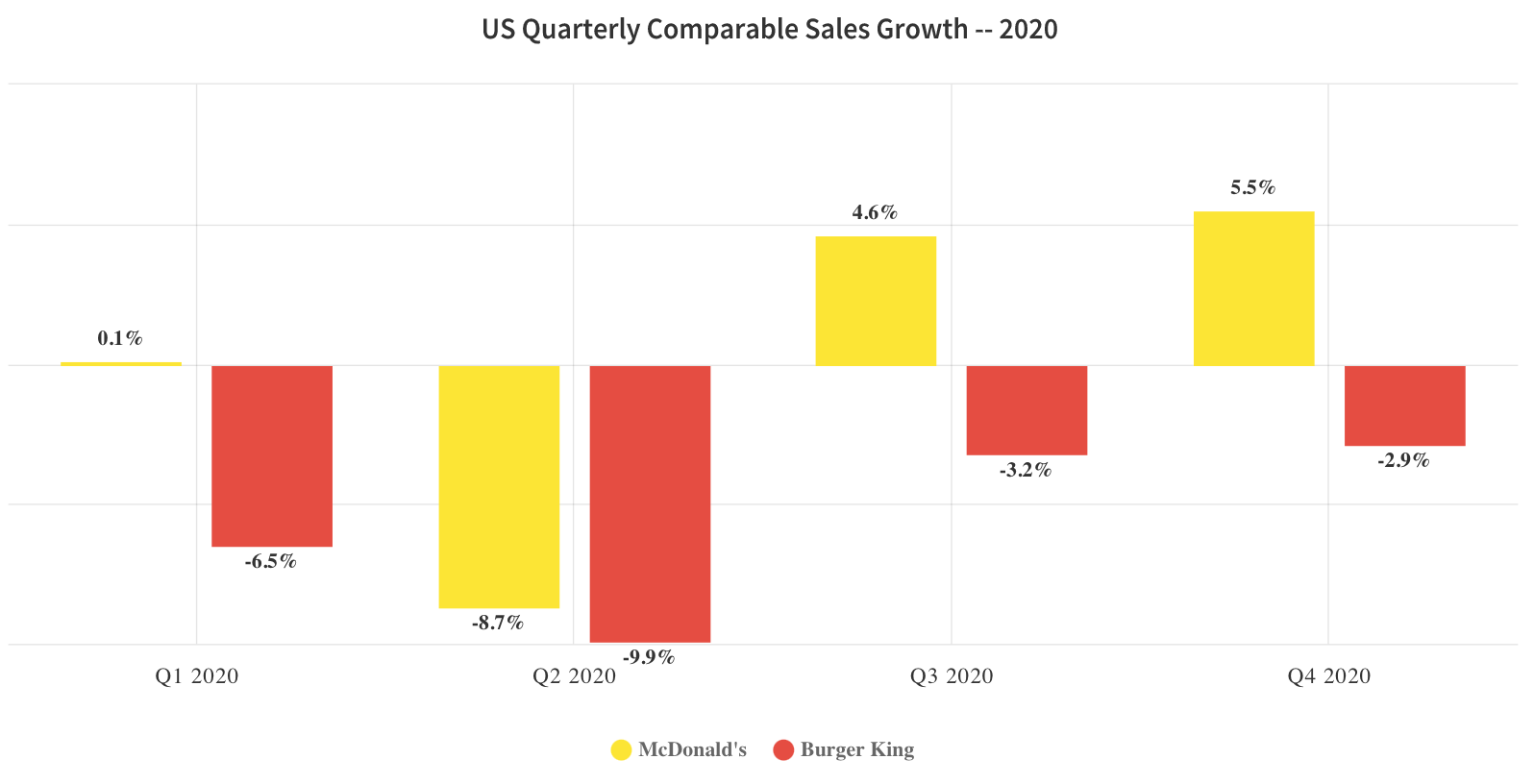 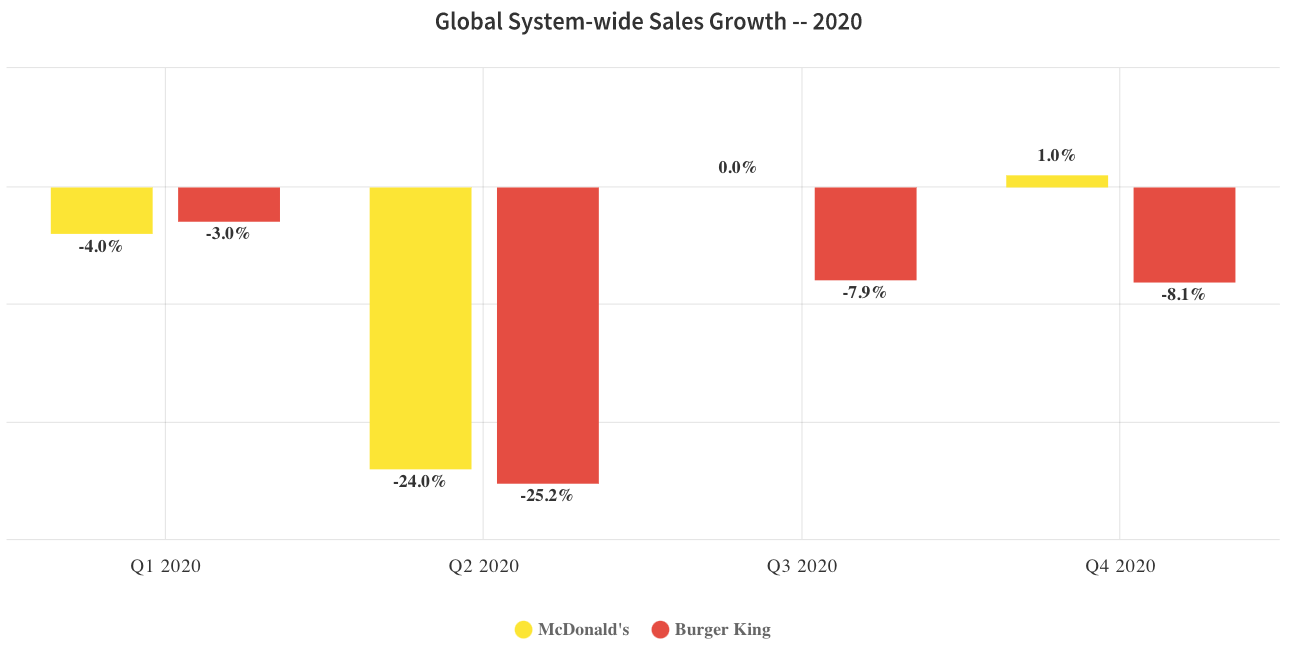 Part of the problem for Burger King might have come down to distribution. By late 2017, McDonald’s was already delivering food via Uber Eats at 3,500 restaurants in the US. Burger King was still “working on it”.

In 2020, McDonald’s had drive-though, self-service kiosks, a mobile app, and deliveries through popular third-party apps. The company also waived all delivery fees and had also cut 30 seconds off of average drive-through wait times over the prior few years.

So, the two were basically the same as far as distribution. But McDonald’s clearly performed better – or at least less badly – in 2020. Why? I asked Machado.

“The key drivers for QSR are taste, value and convenience. During the pandemic, digital sales (especially delivery) and drive-through became even more important,” he said. “In many countries, we have lots of food courts in malls (like in Brazil).

“Many of our key markets were completely closed (like in France and China). And in the US, McDonald’s has double the number of restaurants we have (so they are more convenient). Also, they had some great wins in terms of their marketing programs. And that’s normal because they have great teams and a strong budget.”

The overall US fast-food burger market

Of course, the battle between McDonald’s and Burger King does not occur in a restaurant vacuum. In 2015, for example, Wendy’s sales grew more than 5% thanks to a “4 for $4” sales promotion. There are always general forces and trends at work within the entire fast-food burger segment.

In other words, McDonald’s lost 0.8% of the market in five years – and most of that went to chains other than Burger King, which gained only 0.3% of the market.

“My understanding based on the data you are showing is that McDonald’s lost share a bit and Burger King gained share a bit,” Machado said. “QSR has lots of new players, and it is natural to see the large brands losing a bit of share as the market grows and new players come in.”

So, in terms of the market, what role did Burger King’s advertising under Machado might have played?

Short- and medium-term success depends on the food items on the menu and sales promotions that are advertised – both of which are measured by metrics such as comparable sales. Long-term success depends on brand advertising and franchise expansion – and one of those metrics are system-wide sales. In both contexts, Burger King outgrew McDonald’s under Machado (until the pandemic).

One famous brand advertisement was the Moldy Whopper campaign – which led Burger King to being the most awarded client of the past year in The Drum’s new World Creative Rankings. It was indeed controversial.

Personally, I thought that the brand advertisement was a terrible idea because the last thing restaurants should do is make their food look disgusting to eat in front of millions of people. But there is no evidence that the campaign harmed Burger King. Machado also recommended that I watch this case study on YouTube.

The US brand valuations

“Burger King's race is not against McDonald’s. Its race is to grow its brand and its business,” Machado said. “Growing a brand by one-third in a couple of years is not bad. As I said, McDonald’s is a formidable company. They are way larger than Burger King. So, obviously they will tend to grow more in absolute value.”

McDonald’s did not respond to a request for comment for this column.

So, did Machado succeed in the end? The short-term, promotional advertising and the creative, long-term brand campaigns undoubtedly helped Burger King’s positive results. But, of course, they worked together with things including menu choices and franchise expansion. Never underestimate the power of chicken fries.

The Promotion Fix is an exclusive column for The Drum contributed by global keynote and virtual marketing speaker Samuel Scott, a former journalist, newspaper editor and director of marketing in the high-tech industry. Follow him on Twitter. Scott is based out of Tel Aviv, Israel.