Stay ahead – join The Drum+ Skip to content
More

Battle of the sporting giants: who’s winning on social?

By Carly Price - July 7, 2021
How can brands find a hook for their sports partnerships?

With the UK’s summer of sport well under way, which sports tournaments and personalities are creating the most buzz? We’ve gathered social insights from the last month (June 1 to July 1 2021) to find out which events are leading the way on social. We also take a look at how brands are capitalizing on all that social traffic. 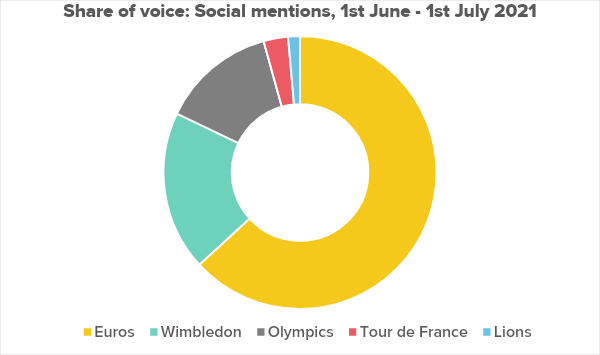 We looked at some of the biggest sporting events taking place this summer – namely the Euros, Wimbledon, the Olympics, the Tour de France and the Lions – to see how they stacked up on social in June.

With the Uefa European Football Championship, or Euros, having kicked off on June 11, at least a couple of weeks ahead of the other sporting events this summer, it’s unsurprising that it generated 63% of social mentions in June, as buzz and momentum continued to grow.

Wimbledon, meanwhile, received almost 19% share of voice, with social conversations peaking on June 28, the first day of the tennis. Despite only being scheduled to start on July 23, the Olympics claimed 13.6% of social conversations in June, with most mentions being positive in sentiment, as users expressed their excitement around the upcoming games.

The Tour de France saw social mentions peak on June 27, as users commented on the opening stage, as well as discussing a spectator who caused a huge crash on the first day of cycling by waving a sign in the riders’ path. Looking at individual athletes, Mark Cavendish was the most posted-about rider across platforms.

And finally, with the Lions not starting until late July, social conversations in June were relatively low volume, with most users who did post eagerly anticipating the start of the event. 13% of users used the lion emoji in their posts, while 42% used the hashtag #lionsrugby. Alun Wyn Jones, off the back of his recent injury, generated the most social buzz, with two-thirds of mentions classified as positive.

How brands are capitalizing on the summer of sport

With the Euros alone generating over half a million social mentions in June in the UK, how are brands capitalizing on the social chatter?

Claiming the lion’s share of social posts by brands, competitions are by far the most popular tactic employed by those looking to make the most of the summer of sport. Young’s Pubs, for instance, has partnered with Wimbledon sponsor Sipsmith to give away a cocktail kit, while Holland & Barrett opted for a similar standard competition off the back of the Euros. Real Foods, meanwhile, brought an element of gamification to their approach, encouraging further engagement from followers.

In running similar competitions, brands should consider how their target audience aligns with those users posting and engaging with related content on social. Looking at the gender split of social posts in June, for instance, 79% of social posts about the Euros were by men, while both Wimbledon and the Olympics were relatively more balanced, with over a third of posts driven by women.

When planning their social content, brands can also look at the most popular hashtags surrounding a specific sports tournament to find and use those most relevant to them. For instance, alongside #Wimbledon, many users used the hashtags #BackTheBrits and #AndyMurray within their posts in June.

Similarly, social insights reveal the most popular emojis for each sporting event, with smiley faces, hearts and the fire emoji leading the way for Olympic-related posts. Brands might also consider any key themes emerging from social posts – for instance, 12% of users posting about the Euros in the UK focused on Gareth Southgate and his management style, which could provide relevancy even for B2B brands.

While tournaments like the Euros and Wimbledon are based in Europe, they captivate audiences across the world. So brands looking to be a part of the global conversation may want to leverage social media to do so.

An example of this is Heineken’s paid social activations launched as part of their official sponsorship of the Euros. Unsurprisingly, Heineken would have paid huge amounts to sponsor the Euros, and so launching a series of paid social campaigns across various markets leverages the global audience of the tournament in a formalized way. By elevating their brand awareness efforts, we can expect these campaigns to bring successful returns for Heineken.

Staying on the ball

Another key tactic employed by brands across both social and other marketing channels is sharing reactive content off the back of the results of key sporting fixtures.

EasyJet’s ‘See Germany’ ad by VCCP, for example, joked about the German team’s exit from the Euros off the back of England’s 2-0 win, seeing an opportunity to promote their flights to Germany. Sainsbury’s also joined in the conversation, promising to rename their Bath Southgate store ‘The Gareth Southgate store’ if England win the tournament.

With plenty more sporting action to come, how will your business tap into the social buzz around the UK’s summer of sport?

Social insights were prepared by Fly on the Wall on behalf of Croud, using Brandwatch and looking at UK-only social mentions across Twitter, news sites, blogs, forums, YouTube and Instagram, from June 1 to July 1 2021 inclusive.

Carly Price is head of marketing at Croud.

This article is about: World, Sports Marketing, Social Media, Creativity

// Featured in this article
Croud

Croud is is a global, full-service, digital marketing partner for some of the world’s leading brands. Through the seamless connection of data, technology and creativity, we develop strategies for sustainable growth that drive immediate business impact.