Samuel Scott takes a look at the recent news that newspaper giant Gannett gave advertisers inaccurate information to advertisers on where their ads were running for nine months. He offers up advice to buyers wanting to protect themselves from similar problems.

Everything online should be considered fake until proven otherwise. Case in point, the Wall Street Journal recently reported that newspaper publisher Gannett “provided inaccurate information to advertisers for nine months, misrepresenting where billions of ads were placed”. Some companies thought they had bought inventory on USA Today’s website but instead found their ads on other Gannett-owned local outlets. Lesser titles.

By now, the many trials and tribulations of letting machines determine ad placements through programmatic advertising are well known. But what was specifically worrisome this time was the fact that independent researchers – and neither Gannett nor a third-party auditor – seemingly discovered the mistake first.

Gannett put it down to “a caching error” and said it "sincerely regrets inadvertently passing along the incorrect data parameter."

The true lesson of Gannet’s advertising debacle is that marketers today need to reconsider everything that we see online – especially when comparatively little in digital advertising today is audited and verified compared to the traditional media world.

In this column, I will give examples that the industry should submit to Google, Facebook, Amazon, YouTube and every adtech platform in general moving forward.

For marketers of a certain age who might have never read a print newspaper or magazine, here is a summary of how things worked in the past. Let’s take a quick trip down media memory lane.

Take a newspaper. Let’s call it The Times. It looks at its internal numbers and sees that 1 million people read the paper every day. Of course, it wants to charge appropriate advertising rates. But potential advertisers want proof of that circulation number, so The Times talks to an auditing firm. Let’s call it ABC Media Audits.

The Times gives circulation information and other company records to ABC. Then, ABC reviews the material and asks The Times for any needed clarifications. If everything passes muster, then ABC certifies that 1 million people indeed buy The Times and lists that result for review by media planners. This audit process occurs at regular intervals, such as every six months or one year.

In such an environment, everyone wins. The Times builds its reputation as a credible and influential media outlet, advertisers are assured that their spend is on a newspaper that is indeed read by 1 million people every day and ABC remains a trusted, impartial authority.

But that world is rapidly disappearing.

Who are the media gatekeepers today?

Gannett undoubtedly has large product and quality assurance teams in some form or another. But who discovered the major nine-month problem? Two independent researchers.

Specifically, it was Adalytics Research founder Krzysztof Franaszek and Braedon Vickers. If the team had not given their findings to the Wall Street Journal, the advertising world might never have known the problem and the advertisers might still be running the ads in the wrong places.

Remember, this mistake happened at a large company that is checked by some of the world’s largest independent auditors. Just think about what might happen at major adtech platforms that do not have such firms specifically checking their advertising metrics at all.

Marketers themselves – rather than traditional audit companies – might need to become the new gatekeepers today to protect their budgets and jobs. In light of Gannett’s debacle, here is what they should be wondering.

Dashboards can measure only what they are designed to measure. Google Analytics, a platform whose free version is used by many small businesses and tech companies, is designed to use front-end JavaScript code to track what is occurring on websites.

But adblockers and related tools stop such front-end scripts from loading. If, say, 30% of the people who visit a website have adblockers, then roughly 30% of its traffic will not be seen in Google Analytics at all. That is a big hole. One solution is to rely on backend, server-side data instead. But regardless, companies need to know the truth.

Marketers should ask Google: ’What percentage of Google Analytics script loadings or executions are blocked on my website, in my country, or in my business category? When, then, is the margin of error for the numbers in my Google Analytics dashboard?’

And: ’What independent, third-party organizations audit the numbers that you report in Google Ads and Google Analytics dashboards?’

At my first job at a marketing agency many years ago, I told clients that ’impressions’ in Google Ads reports are the numbers of people who saw an advertisement. I did not know any better. But one ’impression’ is actually one web browser making one server request for one advertisement. Human eyeballs have nothing to do with it.

Facebook’s Creative Reporting contains ad metrics such as ‘impressions,’ ‘reach,’ and ‘CPM’. But what exactly do those terms mean?

Say that you have segmented the market and want to target a given segment of 1 million people. For Facebook, the first question should be what number of those human beings – not the number of ’accounts’ or ’users’ – can be reached on the platform.

Now, say that you ran an ad to reach 100,000 of those people. Marketers should ask Facebook: ’What percentage of accounts following my page, in my country or in my targeted consumer category are fake, duplicated, bots or otherwise not real, individual human beings? What percentage of ad impressions are not seen by human beings?’

And: ’How many individual human beings saw my ad? What is the CPM when only actual human beings are taken into account? What independent, third-party organizations audit the numbers that you report?’

In 2018, the Media Rating Council began an audit of Facebook’s ad metrics. The review process is still underway.

Also in 2021, ​​Facebook removed more than 16,000 groups in which people were trading fake reviews. A prior study from the University of California at Los Angeles and the University of Southern California also discovered that sellers keep using paid-for reviews because the effects of old ones wear off.

Marketers should ask Amazon: ’What percentage of the reviews on my competitors’ products and within my overall product category are fake?’ And: ’What independent, third-party organizations audit the reviews, ratings and other activity on your platform?’

Also, remember that adtech and martech platforms always prefer to release information in raw numbers without any context rather than give overall percentages. It makes them look better. Here’s how.

Always ask such tough questions in terms of percentages.

The top YouTube video of all time is Baby Shark Dance with 10.3bn views. (Anyone who is surprised should remember how Americans’ younger siblings watched Barney the Annoying Dinosaur over and over again.)

But how many of those views were human beings? A New York Times investigation once showed that people can buy 5,000 YouTube video views for $15. A person in Canada made $200,000 in 2018 by selling 15m fake YouTube views.

And: ’What independent, third-party organizations audit the numbers that you report?’

But wait, there’s more. Marketers should also ask those questions in regards to Instagram followers, likes and comments, as well as mobile app downloads in the Android and iPhone marketplaces.

Just remember one thing: there are countless so-called ’click farms’ throughout the world at which people or machines continuously view videos, click ads, download apps, visit websites, fill out forms or do whatever else clients want over and over again.

If Gannett’s nine-month mistake showed one thing, it is the delusion of effectiveness that underpins much of the programmatic world. 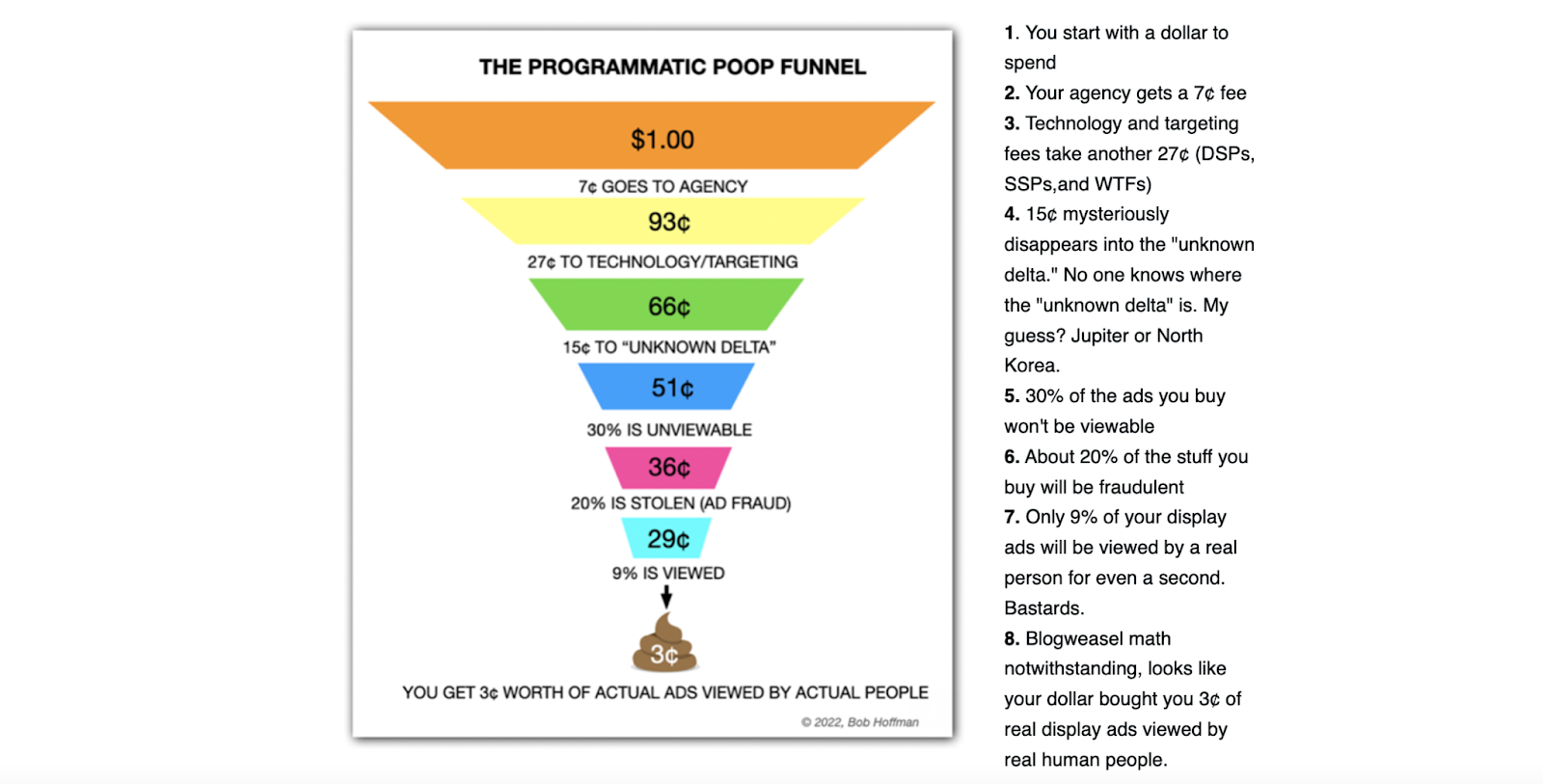 Basically, advertisers get three cents of actual value for every $1 that they spend on programmatic platforms. In marketing talks, I have often put it this way: adtech companies were supposed to save money by cutting out the middlemen, but they just replaced one set of middlemen with another.

What marketers should do: give this funnel to every adtech company that you use or might use and demand that they fill in every step along the way in the context of their product’s operations. Make them document where every single dollar of your spend is going.

In discussions on these topics, adtech company officials will often point out the alleged faults of traditional media. They might say something like: ’How many people actually read that magazine or saw that billboard? We have never known.’

But that is marketing whataboutism. Just because someone released some bad data yesterday does not excuse someone else releasing bad data today.

Sure, there have been causes of fraudulent or inaccurate audience reporting numbers – just research Newsday in 2004, The Wall Street Journal in 2011 and perhaps Nielsen today. But the general models that underpin traditional media’s reporting are sound.

Take billboards. Through traffic counts and demographic studies, we know the average number and type of people who pass through an area over a given period of time. Take events. Through attendance registries, we know how many people will go to a given conference, expo or trade show.

Take cinema ads. Through ticket sales, we know exactly how many people were sitting in auditoriums. Take newspapers and magazines. We know how many issues are sold and the average number of people who read the same, single copy. Take TV. Barb in the UK uses representative population samples.

We know nothing of the sort in online advertising because that ecosystem is full of ones and zeros rather than human beings. Even worse, an entire new generation of marketers now trusts whatever unaudited numbers adtech platforms report because they simply do not know any better.

If I were doing advertising or PR for traditional media companies, I would highlight this lack of precision and accountability among the digital competition.

Remember, in 2017, JPMorgan Chase decreased the number of websites on which it placed ads by almost 99% and had no decline in results. When P&G cut digital media spend by $200m in 2018, reach increased by 10%. In 2021, Uber lessened its online ad budget by two-thirds and saw something similar.

And that is why I personally use online platforms for mainly direct response and lead generation at work. I am skeptical of them for broadly targeted brand advertising that is meant to reach masses of actual human beings.

When would I do so? When they open their black boxes of advertising products, technologies and methods entirely to independent auditing companies. Just as marketers used to demand in the days of old.

Advertisers should not care about protecting a media company or social network’s proprietary information or algorithms. They should care only about getting their money’s worth. And rightly so.

The Promotion Fix is an exclusive column for The Drum contributed by global keynote marketing speaker Samuel Scott, a former journalist, newspaper editor and director of marketing in the high-tech industry. He is based out of Tel Aviv, Israel.