Columnist Samuel Scott wanted to understand the true value of NFTs for marketers. So how better to get to the bottom of the craze than to go out and buy one of his own? Here's what dabbling in Boris Johnson caricatures and Ethereum trading taught him about marketing's latest trend.

To riff off a famous Rory Sutherland quote, NFTs are just JPGs and GIFs with advertising budgets.

In their coverage of such NFT news, the major media often describe them as ‘a unique token on the blockchain’ or ‘a digital asset that represents real-world objects.’ But those vague terms are meaningless.

NFTs are actually just ways to get more people to use cryptocurrency and thereby increase the artificial money’s value. But people can still learn how certain marketing trends have helped to hype this newest business bandwagon. Hopefully they will then use the ideas for something that actually has value and is not destroying the planet.

In this column, I will go through my attempted step-by-step process of buying an NFT – one that features everyone’s favorite prime minister – to show first what they are and then what we can take from one of the biggest crazes since tulips in 1630s Holland.

But beforehand, I have two requests. First, ignore the NFT propaganda, and focus on what you see. Second, disregard the shills who jump on every bandwagon as ‘The future!’ and consider only the facts. (After all, is anyone still using Segways or Clubhouse?) Now, let’s begin.

How to buy an NFT

There are already many places online to sell one’s digital artwork and graphic designs. Creative Market. Etsy. Big Cartel. And more. What makes, say, Mintable’s NFTs (on the left) different from Art Web’s items (on the right)?

Last week, I browsed Mintable – another NFT e-commerce website – to see. And I saw this. 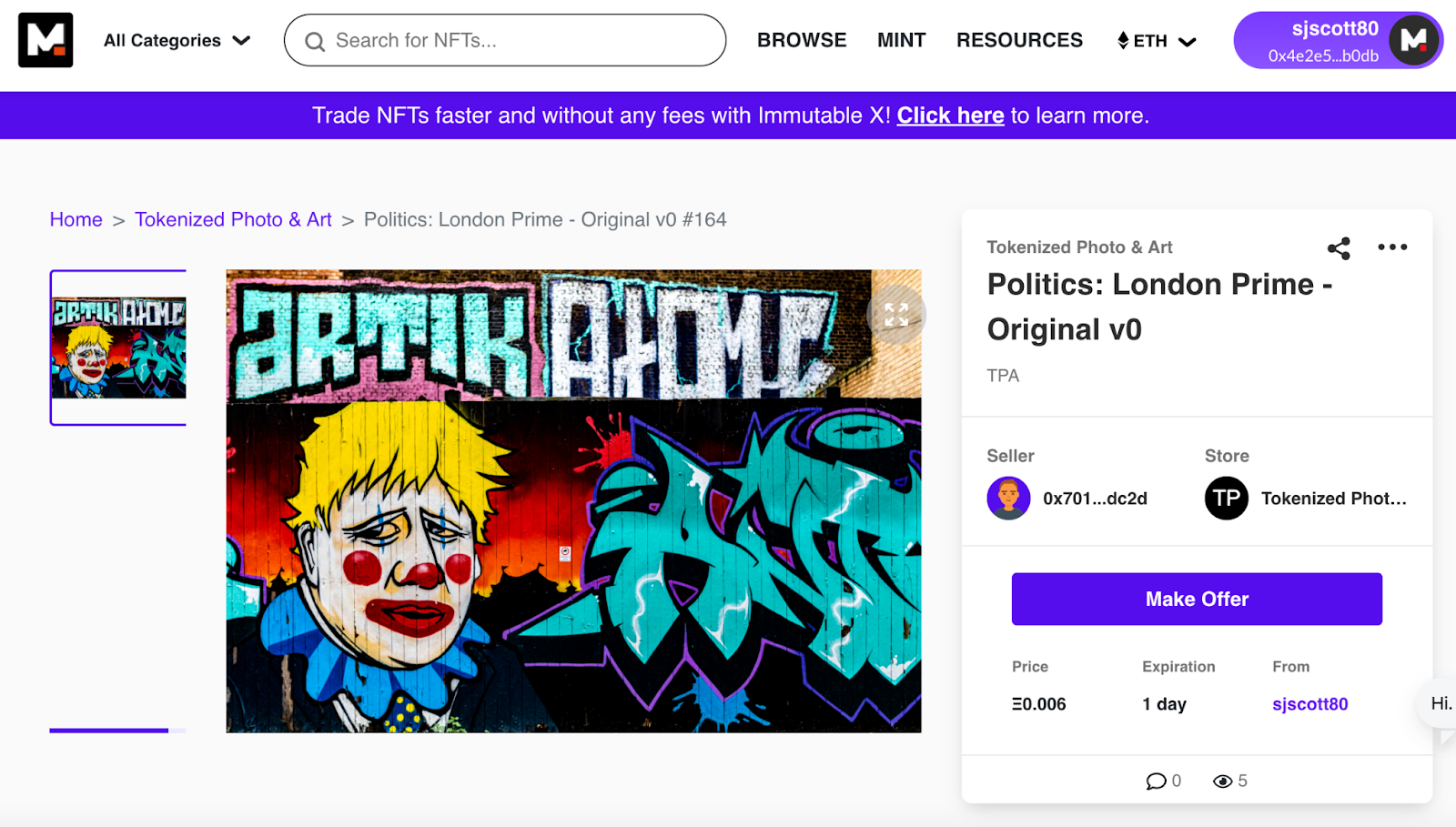 Mintable had my curiosity, but now they had my attention. To place a bid, I had to create an account. No big deal. But then I also had to connect an Ethereum (ETH) cryptocurrency wallet through a company called MetaMask.

Not wanting to spend too much, I bought $20 of funds – or 0.00662957 ETH. After the fees, I paid almost $32 to have $20 worth of ETH. My first concern? That was a 60% markup. (Mintable lets people pay with credit cards in USD, but the amount is still converted to ETH – with assumed additional currency exchange fees.) 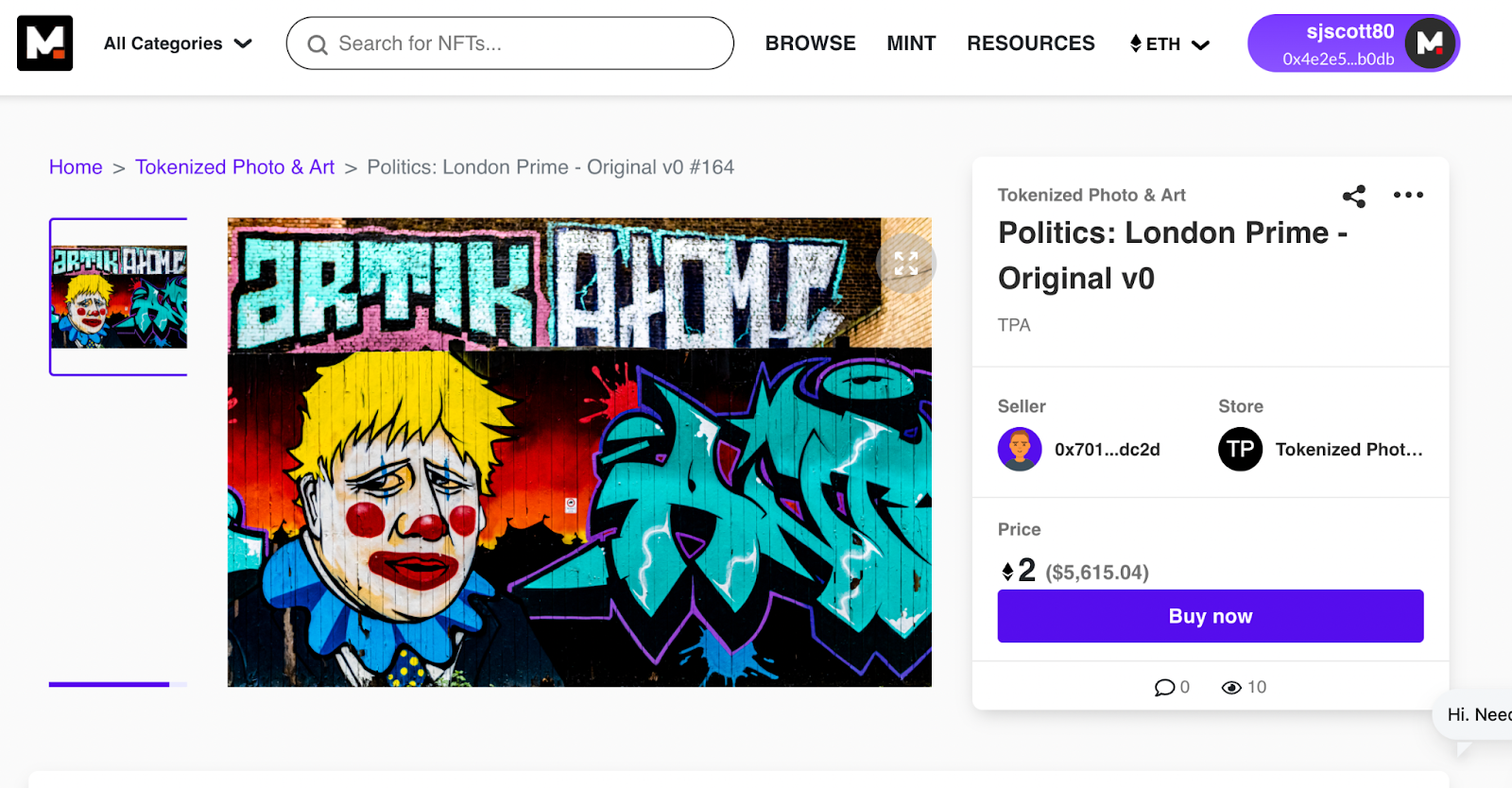 But I still wanted to see a purchase all the way through. So I bid my $20 again on this random ‘UndeadSkelly’ graphic. And I won – no one else had bidded against me. 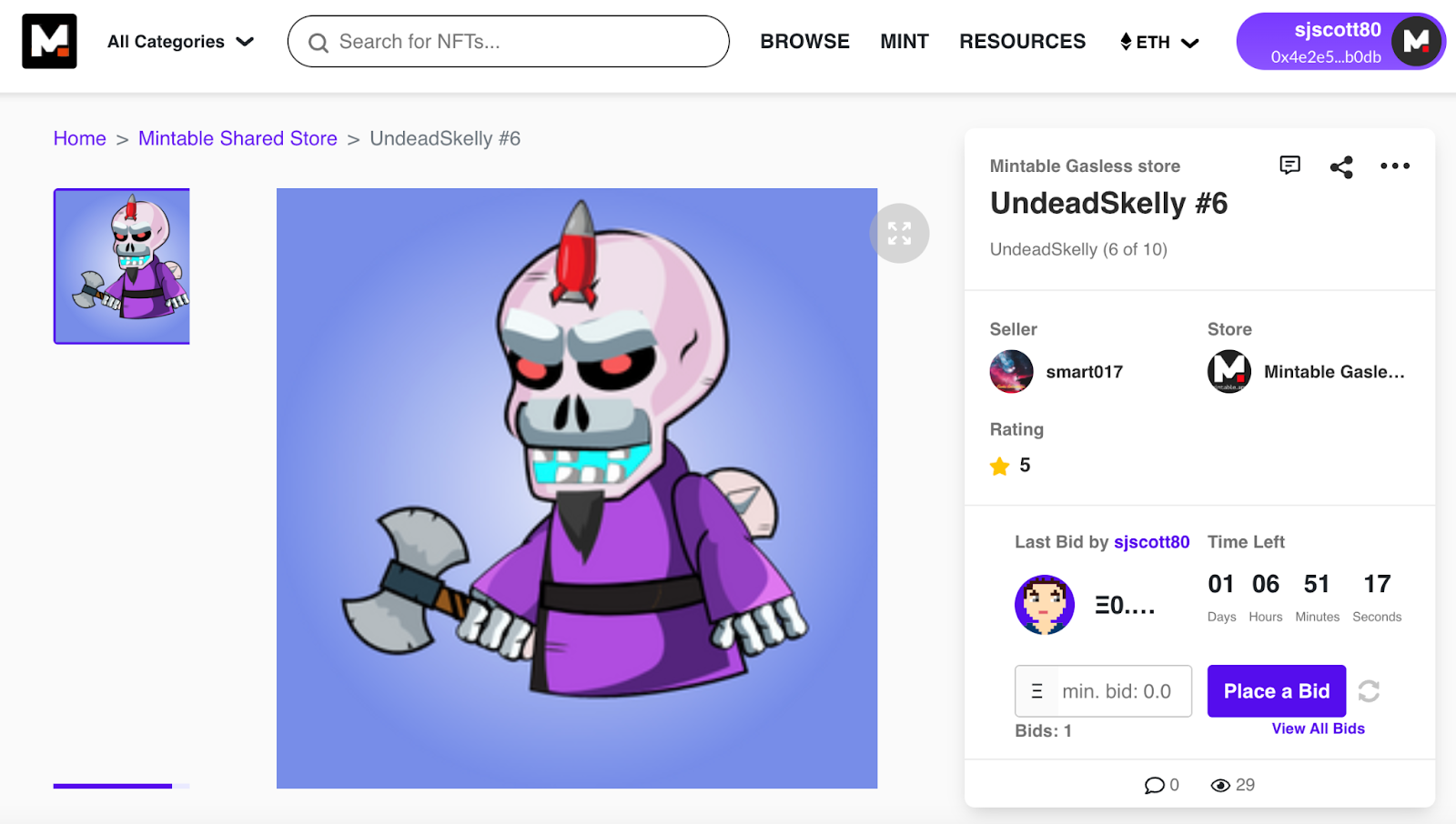 What exactly did I win? Take a look at this other information on the NFT’s listing page.

What did I purchase? A legally enforceable copyright to the image? The sole commercial right to use the media? No.

My third concern: look at the code on the right above. That is the NFT’s metadata, which contains information such as a link that shows where the image is stored on some server somewhere. The metadata is basically a certificate of ownership. Essentially, I had just bought a piece of paper.

Here is what Mintable’s own website states: “When you buy an NFT, what you are really buying is a smart contract (your certificate of ownership) that points to a set of metadata which among other things, includes a link to your NFT file.”

“The only thing secured by the blockchain is the smart contract – your certificate of ownership,” Mintable continues. “This is why there is so much insecurity hindering the widespread adoption of NFTs – without the actual asset being stored on the blockchain, there is no guarantee that the NFT you buy today won’t just end up becoming a broken link to a non-existent file in 5 years if/when the server(s) it is hosted on shits itself.”

Buying an NFT is not buying some type of digital media itself at all. It is purchasing a receipt that shows a link to where something is stored online. And nothing prevents anyone from right-clicking 'Save As' and keeping copies of the media for themselves. My fourth concern: the NFTs listed for sale do not even have watermarks.

Remember two things. Real value usually comes from scarcity, and anyone who controls a server where a file is stored can control what file is stored there. 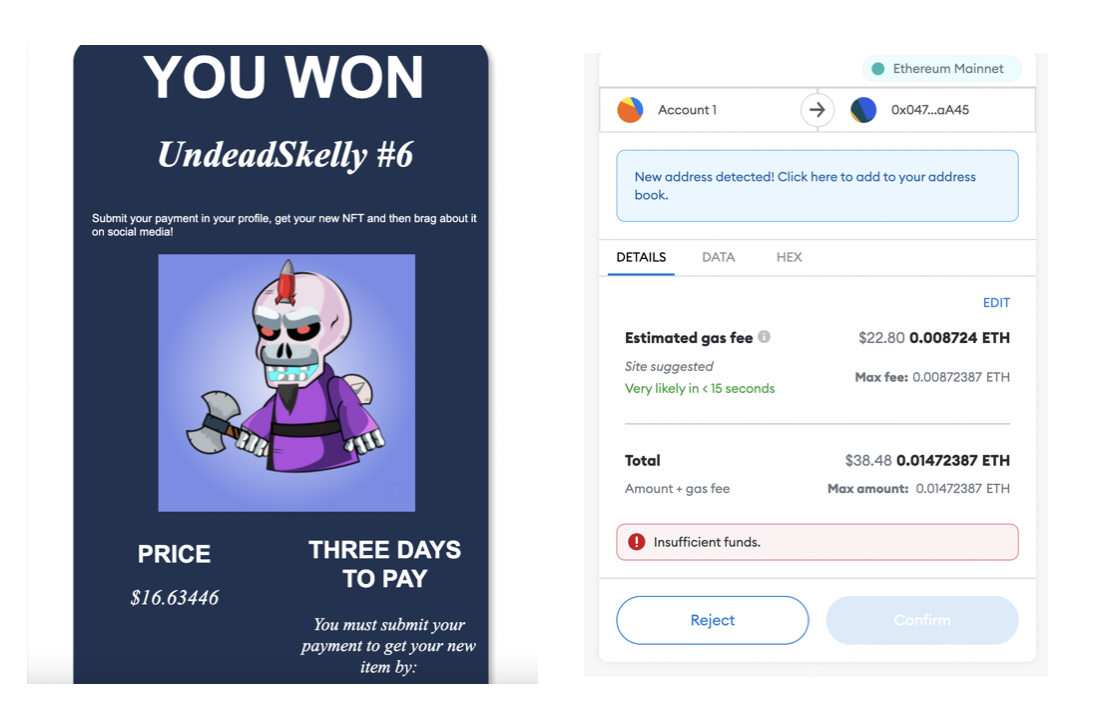 But wait – there’s more. What happened when I went to finalize the UndeadSkelly NFT purchase? For the right to purchase the metadata, I had to pay not only the $32 for $20 worth of ETH cryptocurrency but also $23 in ‘gas fees’ (a carbon offset fee for the energy consumed in blockchain transactions). My fifth concern.

The bottom line? I would have had to buy more ETH cryptocurrency and pay at least $55 to purchase a $20 graphic that countless other people probably already had. That would be a 175% total markup. I thought to hell with this and never confirmed the transaction. (I also deleted my browser history, removed the MetaMask Chrome add-on, poured garlic powder on my computer and threw clumps of salt over my shoulders.)

Of course, most online retailers have added transaction or shipping fees of one sort or another. But I just did not see the added value of this entire process and paying with a sketchy ‘currency’ for an image that I may or may not ‘own’.

For review for a column last month on B2B advertising and content marketing, the Ehrenberg-Bass Institute in Australia gave me the e-book update to How Brands Grow Part 2. Do I now “own” it? Yes.

It sits on my hard drive and in my private Apple iCloud account. I have full agency over that specific digital media item and can do whatever I want with it. No one else has any control over it. Here is a helpful piece of advice: you do not ‘own’ anything digital that is not downloaded and stored on a computer, mobile device, or server that you own or otherwise control.

Buying a copy of an e-book that many others also have is one thing. The story or information itself is valuable. A copy of a random Boris Johnson or UndeadSkelly image is not. Besides, the artistry of most NFTs looks like something I would see in the 1990s video game series Doom. My sixth concern.

So, my original question:wWhat makes Mintable’s ‘NFTs’ different from Art Web’s graphics? That answers lie in the two major marketing trends that people should take away from this whole insanity.

Tech vendor lock-in. Take Curio and Mintable. If their goal is simply to facilitate the sale of digital media and take a cut, then why do they specifically push the use of cryptocurrency as the primary payment method? (When I started to create a Curio account, it also prompted me to connect to MetaMask.)

By pushing users into buying and using cryptocurrency, the companies increase the values of those cryptocurrencies – as well as the values of any personal holdings. After all, the global forex market is also a game of supply and demand – the currencies that are most in use generally have the greatest values. (The Russian ruble is not doing well at the moment.)

It goes far beyond mere NFTs. Take Bitcoin, the original cryptocurrency. According to Scott Galloway, the top 2% of the holders own 95% of the $800 billion supply. The more that crypto is hyped and used in general, the more that a few rich people will become even richer. (For more, I recommend watching 'Line Goes Up – The Problem With NFTs' by Dan Olson’s Folding Ideas on YouTube.)

Still, there are other examples of vendor lock-in (though the practice is sometimes uncomfortably close to monopolistic behavior). In the past, music purchased over Apple iTunes could be played only within iTunes or on an iPod. Some printer companies state that if ink cartridges not sold by them are used, then the warranty is void.

Generational sentiment. I often criticize the lazy use of demographic groups as market segments. But the fact remains that all people born at the same time do experience the same general political and economic events and upheavals.

And if NFTs and the entire crypto world have done one thing well, it is capturing the zeitgeist of younger people. Every enthusiast I know personally is under the age of 35. Take Julie Fredrickson, a tech company founder turned investor who attended a cryptocurrency convention this month and described it in her blog.

“It’s full jubilee at the end of the world shit,” she wrote. “You are surrounded by millennials and gen-zers who know in their gut that their future has been stolen from them. And instead of being pissed they decided to build. And they decided to gamble. And it’s not clear which one is which sometimes.

“Everyone is soaking in student debt and working shitty interchangeable jobs for corporations owned by private equity. No one can afford a house. No one is stable enough for a marriage and children … but if you are in crypto the future looks pretty rosy. You are discussing real estate for your second home and the tax advantages of different jurisdictions.”

The possible future of NFTs

While I am loathe to make marketing predictions and instead choose to critique them, I will make an exception. The very economics of cryptocurrencies mean that their values must collapse one day.

Bitcoin has a limit of 21 million coins, and more than 80% have already been created. What does that mean? Soon, the only way for the price to increase will be to rely on the Greater Fool Theory in market bubbles – that there will always be someone who will buy your widget for more than what you paid.

There is always a point where someone is left holding the bag. Rinse and repeat for many, if not all, cryptocurrencies. And that is only one of all the problems. (I’d also read Why the NFT Market Will Collapse at Project Syndicate.)

Recently, more than $200m worth of NFTs have been stolen from the OpenSea marketplace through an email phishing hack. Many NFT sales have been creators buying their own work to increase the prices. Salesforce employees are rebelling after the company said it will launch an NFT cloud.

Cent, another NFT platform, stopped selling them because of counterfeits. (My comment: they are not “counterfeit” – they are likely 100% entirely accurate copies of things that are freely available.) A colleague at The Drum, media editor John McCarthy, posted a Twitter thread of articles on the use of NFTs in money laundering.

And I have one question for Matt Damon: for that Crypto.com advertisement, did you get paid in cash or cryptocurrency? I would love to know.

Yes, I am a little skeptical. Last year, an Israeli PR agency here asked me for a meeting to discuss some potential consulting work. As it turned out, they were pivoting to the cryptocurrency space and were gaining some big clients who wanted publicity.

One question they asked: “So, which cryptocurrencies do you own?” I almost bit off part of my tongue while trying not to laugh. In what was probably not a surprise, they went with another consultant.

And what will I do with the 0.006 ETH that I still have after this experiment? Maybe I will make a sketchy donation to Boris Johnson’s Tories. It seems to be another fashionable thing to do these days.

The Promotion Fix is an exclusive column for The Drum contributed by global keynote and virtual marketing speaker Samuel Scott, a former journalist, newspaper editor and director of marketing in the high-tech industry. He is based out of Tel Aviv, Israel.