A complete timeline of 2021 CTV innovation

By Paul Gubbins - September 8, 2021
The CTV ad ecosystem is in a very similar position to mobile in the app space a decade ago

Paul Gubbins, head of strategic partnerships at Publica, made some bold predictions about the advancement of the connected TV space back in December 2020. He said if 2020 was the year of CTV, 2021 will be the year of CTV advertising. Almost one year later, Paul has come back to fact-check his predictions.

Fast forward to August 2021 and I think it’s safe to say that prediction has come to fruition. But let’s look forward once more to see the key trends currently shaping CTV from a programmatic perspective.

Where is the real CTV inventory growth coming from?

Many TV viewers have discovered AVOD services during global lockdowns and many more will as smart TV manufacturers such as Samsung and LG make it much easier to discover these services via improved search functionalities on their TV device hardware.

This year, advertisers are expected to increase their CTV ad spending in the US by 48% year-on-year to top $13.4bn and to spend $6.7bn specifically on CTV ads purchased programmatically.

Where will the budget come from then?

I asked my LinkedIn followers where they thought the ad budgets would actually come from to fuel this increasing appetite for scaled programmatic CTV ad buys (I voted for digital display initially, closely followed by traditional TV). 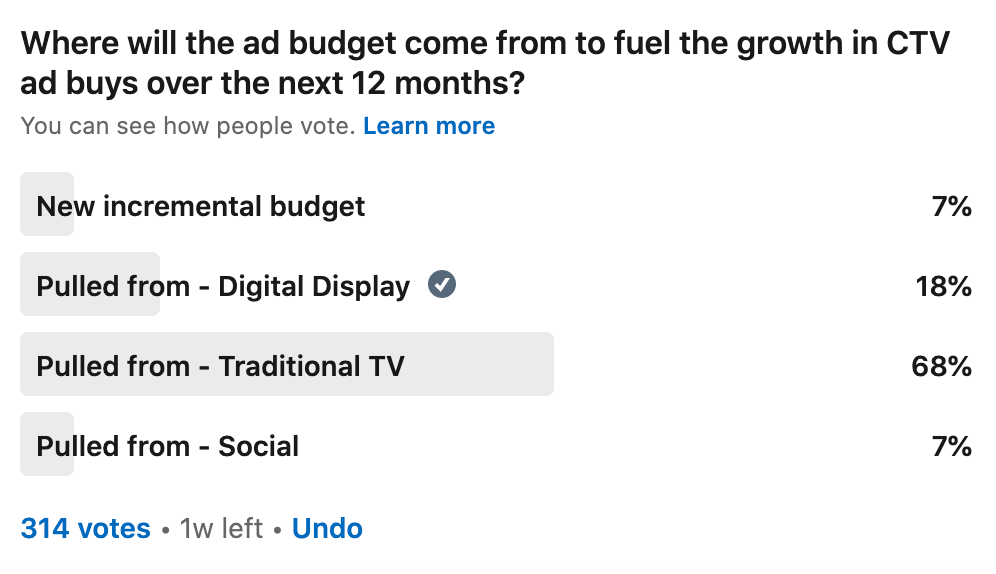 We know the demand is there from advertisers and the addressable CTV inventory is growing by the day, so what then have been some of the blockers to advertisers been doing to actually increase their CTV ad buys via programmatic pipes?

One of the main historical challenges facing advertisers entering the CTV ecosystem via OpenRTB has been the lack of controls available to them. In their traditional TV ad buys, it has been very easy for advertisers to manage things such as competitive ad separation, frequency and position in an ad break. However, in the early days of CTV many streaming apps could not support the same levels of controls that linear TV had offered to advertisers due to limitations in CTV ad-serving technologies.

Now they can. Many of the legacy perceptions marketers had around buying ad spots in streaming apps via programmatic pipes have been completely challenged by what is actually possible today due to the innovation from SSPs, DSPs and ad servers building for CTV publishers and advertisers.

Let’s look at these areas where we have seen real innovation over the last 12 months.

It is now possible for a CTV publisher to offer the same controls and more that an advertiser is used to when buying spots on traditional TV.

Publishers also have the added benefit via advanced ad pods to optimize strategically via length of creative per dollar uplift – all controls that have historically not been available to them due to the limited capabilities of CTV adtech. Those days are gone, as should the perceptions around what limited controls and targeting are actually available in CTV ad breaks.

While the display world still debates the pros and cons of client v server-side when it comes to header bidding, CTV publishers leapfrogged them and have adopted S2S unified auctions in record numbers.

Smart TVs were not designed to run code or support auction logic, hence everything has been deployed from the server-side. The upside for programmatic CTV buyers is the fact they can now access premium FAST and AVOD supply at scale. Publishers are no longer giving their inventory to one or two SSPs on an exclusive basis or via waterfalls, but have opened up their inventory with parity access to meet the growing demand from the buy side.

Server-side ad insertion, or SSAI as it is more commonly referred to, is also being deployed by many leading publishers to eradicate that spinning wheel of doom ‘loading’ sign many viewers were greeted with within CTV ad breaks, and are instead now stitching seamless streams of content and ads.

It is easy to understand why some advertisers were reluctant to ramp their ad buys in CTV – nobody wants to sit in front of a big screen TV that is buffering. I am happy to say the days of poor CTV supply access via programmatic pipes are gone, as are the days of cumberstone and clunky ad breaks thanks to the growing adoption of SSAI.

The perception that CTV inventory is sold by ad networks or SSPs exclusively is now outdated. Unified auctions have been adopted at scale because they work in CTV, just like they do in digital display and mobile.

Despite this rise in advertiser demand for streaming audiences, frequency management has thus far remained a challenge for many CTV publishers, with multiple creatives from the same advertiser or competitive ads running back-to-back within the same ad breaks.

Some have said we need to introduce the AD-ID that was originally created by the ANA (Association of National Advertisers) into the CTV ecosystem, as it is used successfully by thousands of advertisers and agencies in linear ad buys today. There are calls to have this ID adopted because in CTV it can be common for the same ad to have multiple identifiers, leading to difficulties in applying holistic frequency controls.

This is something we have seen first-hand at Publica, the CTV ad server I work for. We’ve been analyzing factors enabling accurate ad deduplication at scale.

Critical data signals such as the advertiser domain are only present in about 34% of CTV bid responses today. The IAB category of the ad is passed in 51% of cases. Some tech relies on clickthrough URLs, which can be widely inaccurate in an environment where a click isn’t an option for the end user.

We use Elea AI, an artificial intelligence engine that leverages CTV-specific ad delivery algorithms in the process of constructing ad breaks. It relies upon a logo recognition machine learning (ML) algorithm to identify the brand behind a video ad, and it enables publishers to detect which advertiser is about to run programmatically, even when advertiser information isn’t provided by a buyer.

We are going to see a lot more innovation from ad servers, SSPs and DSPs this year when it comes to CTV frequency management; however, it is important to note it is possible for the buy and sell side to manage today, albeit only with the streaming publishers who have adopted advanced ad pod management solutions.

How will programmatic CTV deals be traded in the future?

This is a question I often ask myself and industry friends.

There is a general perception today that all programmatic (display/mobile/CTV) will eventually be transacted via biddable PMPs or programmatic guaranteed executions. So what would this mean for the open marketplace?

Now I understand why people would think this about display and mobile because you need an ID and data to transact efficiently in the OMP. Both will become increasingly difficult to obtain outside of deals transacted directly and underpinned with first-party insights.

However, CTV is not facing the same headwinds and IDs are still very much present and can be passed in a privacy-compliant way by streaming apps that are not forced to adhere to the terms imposed by big browsers or mobile app stores. The majority of smart TVs have their own operating systems that are unique to CTV, after all.

We assume that the majority of network and broadcaster CTV inventory will be transacted via deals in the future as they have a finite amount of inventory and it also has to support their upfront commitments. However, as we have established, the real growth in CTV at the moment is coming from low-cost or free streaming services, and it is these publishers that will benefit from the value that can be extracted from a healthy, fraud-free and transparent open marketplace.

Like I often do when trying to figure out where the puck is heading in adtech, I ask my network.

I think we need a healthy open marketplace, as it supports audience discovery for advertisers and captures incremental demand for those on the sell-side. My prediction is that more CTV will be transacted via OMP in the years ahead due to growing supply volumes, and in line with advances around brand safety and measurement.

Forrester data shows smart TV penetration has reached 56% in the US, 63% in the UK, 57% in Australia and 76% in China. This means FAST and AVOD publishers are seeing more interest from advertisers for their services than ever before.

Brits say they are only willing to pay up to £20 or less per month for SVOD. Consistent with the findings of The Trade Desk Future of TV report (January 2021), consumer streaming adoption is accelerating, as is their appetite for free or low-cost services. 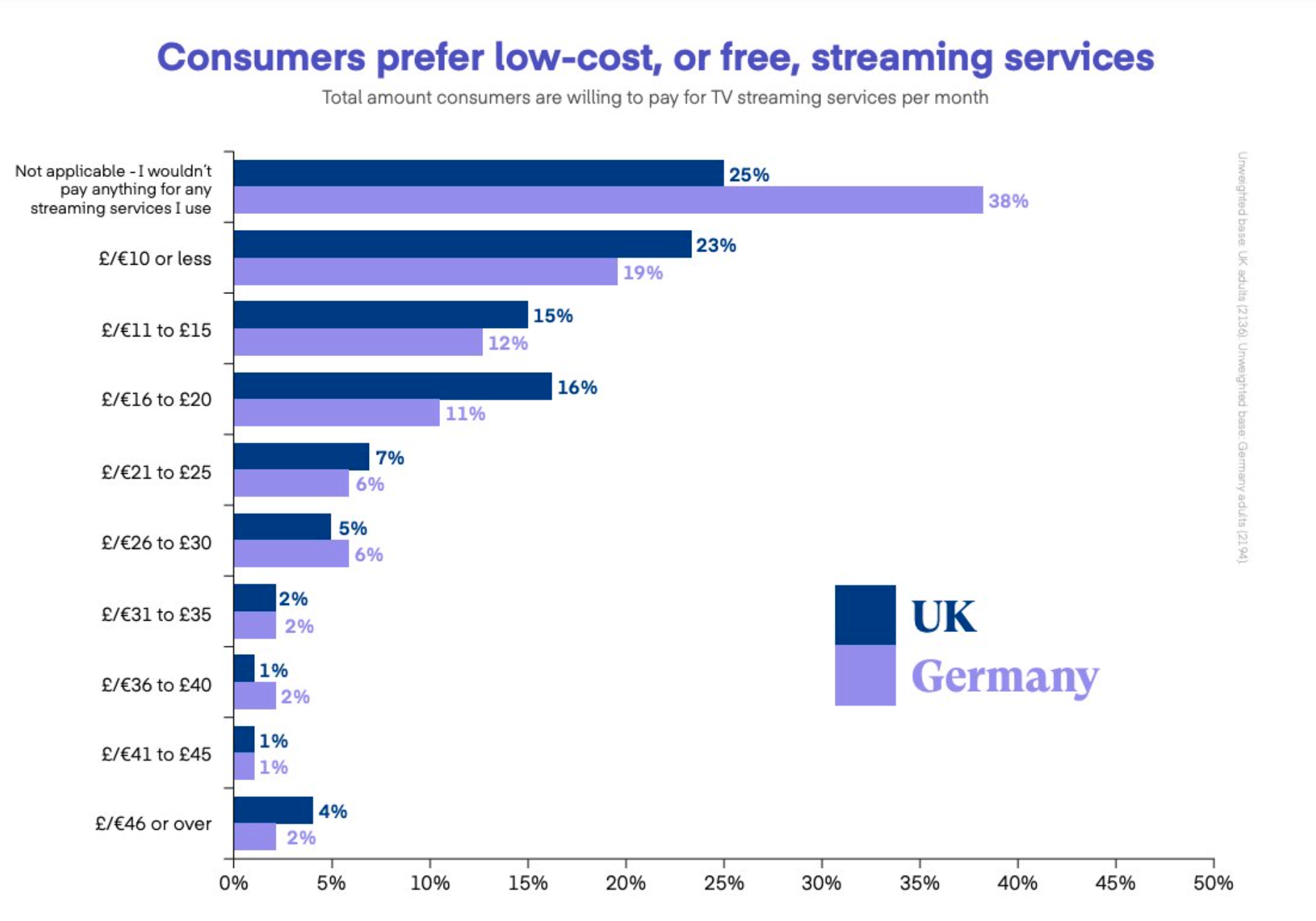 With this trend, coupled with the fact more streaming publishers are now supporting header bidding, it was only a matter of time before those on the buy side started to apply their honed ‘SPO’ practices they mastered in display to the premium supply ecosystem of streaming (where clearing prices can be considerably higher than display) bought via DSPs due to the increase in OTT inventory liquidity.

CTV publishers should be doing everything in their power to better understand the buy-side’s requirements from OTT inventory and making the data insights available to their SSPs that in turn ensure their connected DSPs do not ‘SPO’ them out of their supply path and can continue to increase their ad buys.

Examples of questions a publisher can be asking when it comes to buy-side SPO practices:

The CTV ad ecosystem is in a very similar position to mobile in the app space a decade ago.

Back in 2010, I was heading up sales for what was then one of the first mobile DSPs (StrikeAd acquired by Sizmek), and the buy and sell-side conversations were very similar to those I am having today.

Users, just like back then, were increasingly migrating to free ad-supported apps – now it is TVs instead of mobiles.

Advertisers and agencies are ramping up their CTV internal skills quickly, just like they did on mobile. CTV publishers are on the same journey of yield discovery that those mobile app publishers were all those years ago, and are breaking free of mediation layers in favor of programmatic and unified auctions.

M&A around CTV point solutions is at an all-time high, just like it was for those who were built for mobile apps as we transitioned to a mobile-first era. Now we find ourselves transitioning to a CTV first mindset, driven by user behaviors.

I have discussed how programmatic CTV ad buys can be delivered today at scale, and with more controls and targeting than ever available via traditional TV ad buys; however, it would be naive of me to say the ecosystem is anything other than still in its teenage years. We still have a lot of innovation to play out in the measurement and standards space, but I am extremely excited to be a part of its growth.

Keep your eyes and ears open for a lot more discussion around CTV app discoverability in the coming years. It will become the new battleground for the TV attention economy.