By Roland Storti | Founder and CEO

Digital advertising is growing fast. Faster than any other channel. In 2019 it’s forecast to peak at 12%, reaching US$254 billion globally.

According to the same Dentsu Aegis Network report, the total global ad spend will reach US$625 billion, with Asia-Pacific leading the growth at 4.5%. Yet for all of the talk of its demise, this will be the first year digital ad spend tops that of TV in the US. However, it still commands 34.5% of the global ad pie.

TV, radio, outdoor and print represent traditional media. Most are largely unchanged in the process of how they have reached consumers for 70+ years. A shift is taking place though. Despite the scale of ad fraud - at the low-end estimates are US$6.5 billion and at the upper end, as much as US$19 billion. And I expect the next 12 months to bring about a more rapid pace of change with new technologies being rolled out. The holy grail is verified engagements converting O2O (offline-to-online). How will digital fair if there was to be a level playing field?

Mobiles have become ubiquitous. The average adult in the UK is now spending 5 hours a day on their device. However, attempts to advertise on this medium have mainly consisted of how many native ads Facebook and Google can fit above the fold/into our feed without turning us off, also known as ‘ad load’. And that saturation point for its ‘News Feed’ was reached some time ago.

So how to make the most out of mobile?

As context, there’s already a discrepancy between the time we spend with the channel and the advertising dollars it attracts. According to the technology doyenne of the valley, Mary Meeker that currently equates to US$7 billion. 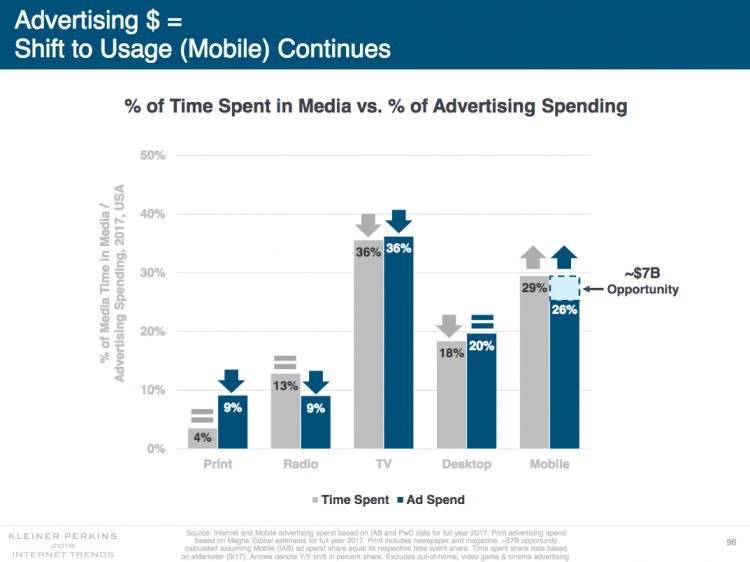 But it’s also the way mobile is used. As we mentioned before, more ads aren’t going to cut it. And making the experience any more interruptive on a smaller screen won’t help either. We need to take the mobile and use it as a gateway for other experiences. A second screen which is an additive, to the experience rather than a competing one.

Potentially the most revolutionising aspect of the fight to digitise ‘old’ media is sound. Since the launch of iBeacons from Apple, shopping centres have sent push notifications to consumers about offers within a geo-fenced area using Bluetooth with mixed success. And apps like Shopkick utilise the microphone in your smartphone to target users.

It's of critical importance with any technology that is potentially omnipresent, that it's not invasive, ensuring that users are in control of any data created and profit from its sharing.

TicketMaster is now using technology which has a unique audio sound for each ticket, to help scan into venues where there's a lack of WiFi support.

And that's just the start. Audio encoding offers brands and marketers the chance to serve more information instantly to consumers. The sound space is burgeoning with innovation right now. Whether it's Google with its Nearby proximity-based tech. Or developers like Lisnr building out data-over-audio solutions. Or Minfo delivering content consumers request from TV, radio, billboards and YouTube videos via an app.

There are other examples of traditional media taking cues from the digital world and making their platform more engaging. For instance, in Australia in December JWT and JCDecaux partnered together for what it claims is an OOH first for local budget airline Jetstar. The campaign featured eye-tracking technology above the digital billboards to see which destinations the viewer was interested in most and based on the result some were shown the sale price while others were rewarded with up to $500 gift cards towards their next holiday. The ability to take the audience’s reaction and engage with them off the back of it is something I think we’ll see more of in other sectors too.

However, I find this type of unsolicited data capture to be a little creepy - I’d prefer to know upfront what my actions are going to be used for by brands. And I don’t think I’m the only one who feels this way! Which is why we’re going to see more GDPR-like legislation in other regions which may hamper this level of tracking.

For all of the talk of its decline, TV advertising numbers continue to grow. The audience numbers may be declining, but it’s still the only place to reach the masses. 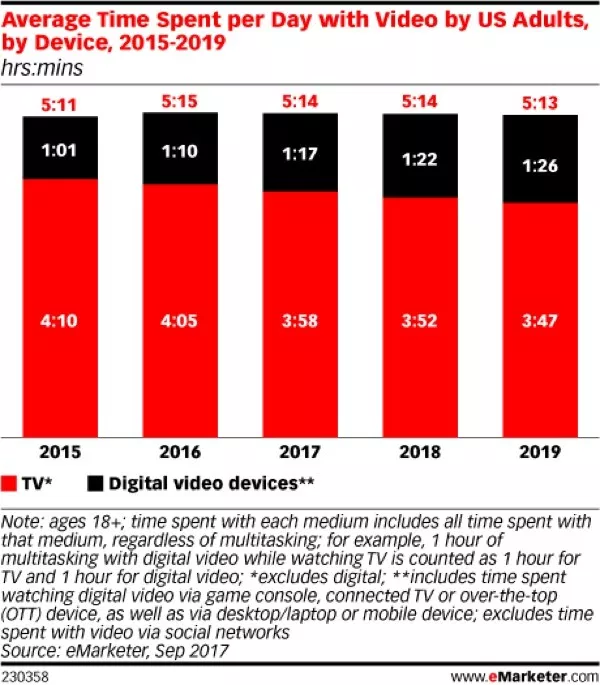 According to eMarketer, connected TVs reached 55.5% of the US population in 2018. Addressable TV ads are changing a marketer’s potential to display creative based on the audience watching. It is though, still in its infancy. The aim is to replicate digital’s ability to A/B test ads and provide greater levels of attribution. However, tracking the effectiveness of A/B test ads on TV will remain an issue without the introduction of new solutions.

Creator of digital ‘experiences’, Brightline, has produced some impressive results in the US with interactive ad campaigns. By offering the viewer the chance to shape the content they ’re watching, the company has managed to achieve a 6% CTR, which is significantly higher than the industry standard of around 0.35% for display. The hope, of course, is to keep people in the room when the ads come on. Currently, there’s multiple choice questions, like what colour car you’d like to see, but I can imagine some ads taking on a Black Mirror-like choose-your-own-ad quality later in the year.

Recent announcements like the partnership for ad measurement firm Data Plus Math with Comcast-owned ad network FreeWheel, do improve the ability to measure the impact of TV, VOD and OTT. But the only way to achieve 100% attribution is to develop a platform allowing for an instant response from interested consumers. The tech combined with the ability to access info could allow marketers to create ‘impulse engagement’.

The ability to digitize offline media or to convert O2O (Offline-2-Online) could see a resurgence of TV ad spend over time and, hopefully, more innovative direct response campaigns from creatives.

Through technology like audio markers, for the first time, there will be a chance to accurately measure the engagement of a campaign, similar to the digital campaigns that are already run today.

Roland Storti is the founder and CEO of Minfo.